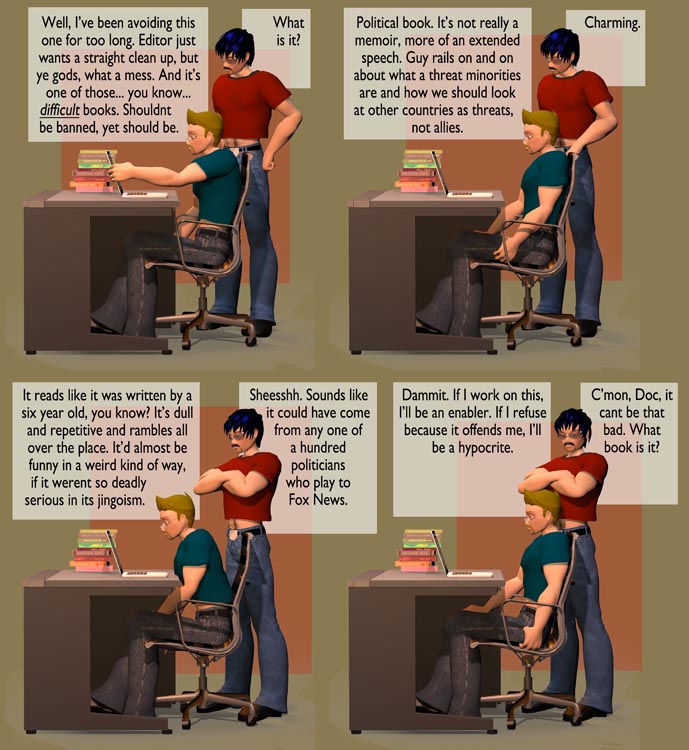 The book in question is “My Struggles” — or, as it’s more commonly known, Mein Kampf. And here’s the quandary: yes, its author was a racist, xenophobic, worthless waste of space who considered Jews and gays and gypsies to be less than animals. There’s actually a chapter where he writes about animal husbandry and how it’s more important than allowing these groups to fester and perpetuate. It’s a near-comprehensible, vile piece of work… but do we ban it just because of who the author is and because of what he writes?

A lot of people will say, “Of course”, and yet all that does is create a situation where someone else will find some other book offensive and insist on its being banned because someone else didnt like Mein Kampf, and it’s all an eye for an eye and a tooth for a tooth, and before long, as the line goes, everyone is running around blind and unable to chew. And this is the inherent issue with even the reason for a Banned Books Week: someone somewhere is going to be offended by something, no matter what. There are people who want Huckleberry Finn pulled because Jim is called a nigger… and yet these are the same people who will overlook Twain’s much, much larger message about the horrors of slavery because of that one word. And in many respects they are no different from the folks who get irate about Charlotte’s Web because it has animals that talk.

Tomorrow, something a bit different. Doc’s refurbished editions need covers, and we will have our own little gallery of “books that are now okay for everyone!” With it will be a couple for those submitted to a “Write a Banned Book Proposal” contest I ran at panhistoria.com.