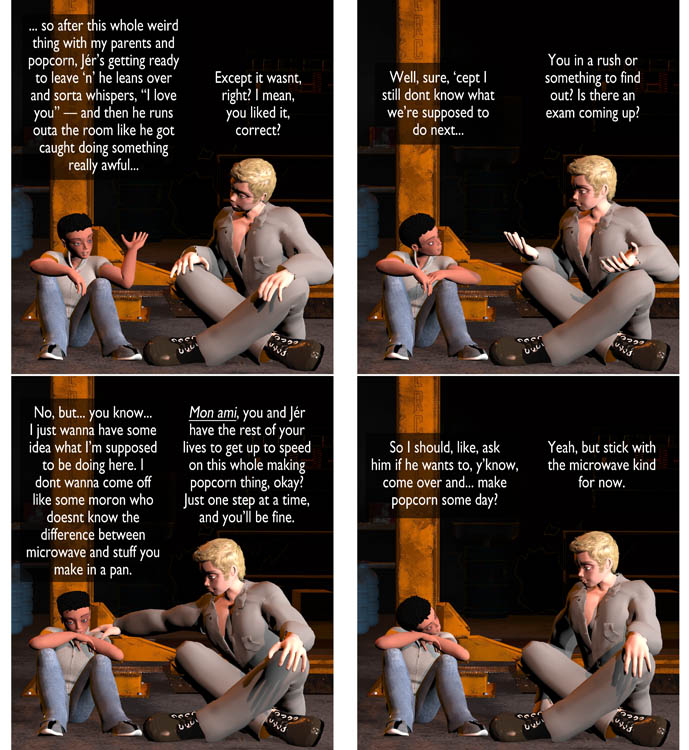 My first big relationship came along when I was in my mid-20s. I was still pretty unaware when it came to this whole making popcorn thing, even though I knew I wanted to move on to some of the more interesting ways of accomplishing that goal. Steve, on the other hand, was already very adept at making all manner of the stuff, and he was a patient teacher who let me explore my own sensibilities at my own pace.

IMHO, we all rush into this whole popcorn thing a bit too quickly sometimes. We cant wait to throw that flattened bag into the microwave and watch it lift and expand and then explode all over the place. And while we’re rushing to do that, people who should be slowing us down a bit — like parents — are reluctant to do so because their own parents had no clue how to talk about this stuff. And when you’re a gay kid raised in a gay household, I would suspect that even there it gets… hmm… even more awkward, for a whole host of reasons that go beyond North America’s reluctance to talk meaningfully about sex in the first place.

But hopefully Elliot and Gilles have set these two off on the right path by emphasizing co-operation and mutual discovery over the (forgive the pun) nuts and bolts of what goes where. Sure, there’s bound to be a lot of fumbling around at the outset, but at least they’re going into it knowing it’s working together to meet that end goal.

Well, this ran longer than I planned (as usual) and there’s a couple of things that’re going to have to be addressed in later storylines, like Algie’s casually snobby racism… but we’ll get back to those when the boys go back to Scotland for the next term. In the interim, we’re going to be wrapping up the Big Storyline on the main page and then head into some Pride stuff. Hope you’re enjoying the ride.