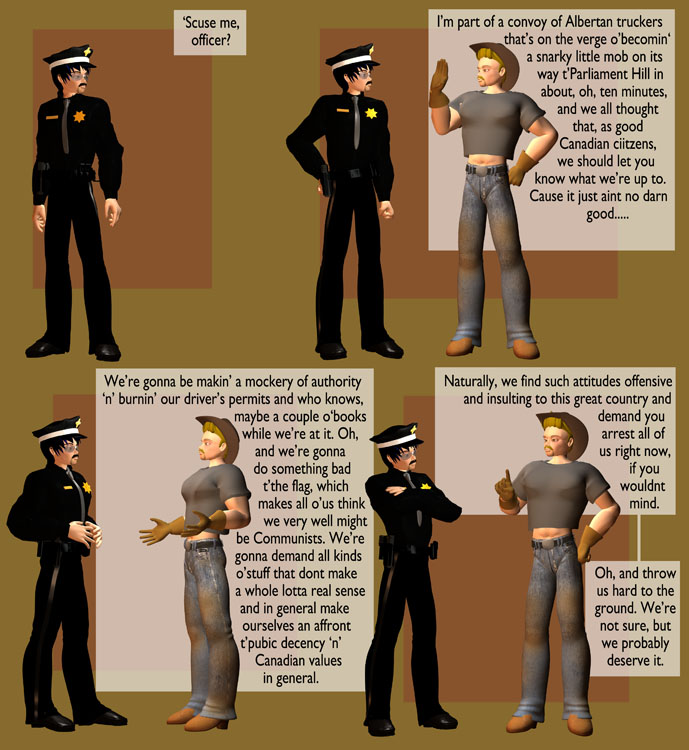 My Canadian readers will no doubt recognize what’s going on here, but to fill the rest of you in… There’s currently a convoy of truckers en route to Ottawa to complain that the federal government isnt doing enough to protect our oil and gas industry. True, prices have fallen, but the reason for that would seem to be two-fold: (1) those prices are determined by forces outside Canada, like speculators, and (2) most of the stuff coming out of southern Alberta these days is really crap oil, bottom of the bottom of the barrel sludge that we can only sell to countries that are outside any sort of global environmental regulations, like India and China. The truckers seem to think the solution to all this is more pipelines (which would put them out of a job, but that’s another story for another time), which I gather they think just magically appear in the ground because of, oh, magic oil pipeline fairies or something. Essentially, they’re upset with Trudeau over something Harper wasnt able to accomplish in his nine years — in fact, it was Harper’s mismanagement of the paperwork on the TransMountain pipeline that sent that one back to Square One… yet somehow this is Trudeau’s fault.

I know, it’s not supposed to make sense. What it is in reality is a pre-election photo-op and little more, in which these good Albertans are being used by a party that desperately wants to get back into power… presumably just for the sheer hell of it, because they have yet to put anything out there in the way of a position paper or policy on anything, aside from “If Trudeau likes it, we dont!”

Does that sound familiar?

And what’s really sad is that otherwise well-versed and informed Canadians seem to be falling for it.