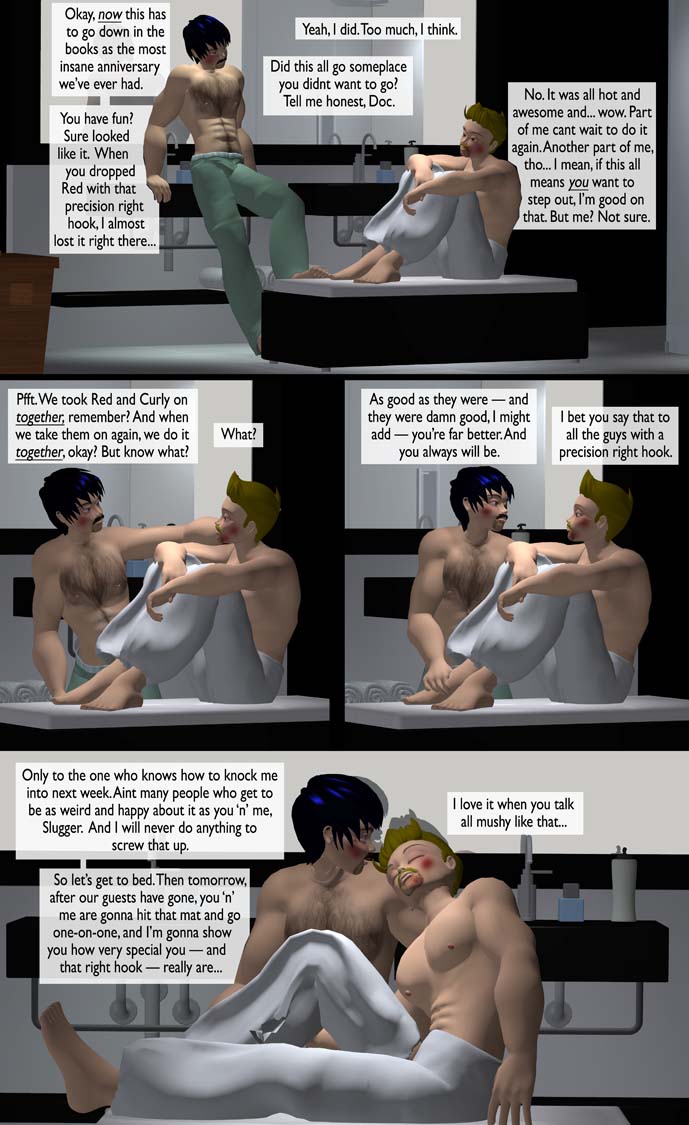 Anyone who’s more than a casual reader of this strip knows these guys’ proclivities when it comes to life between the sheets. God knows I’ve more than hinted at it from time to time over the years. But this is perhaps the first time it’s really been addressed this deeply and in tandem with things like monogamy. As Doc pointed out a few pages back, people will say “But you’re into a fetish! How can you be monogamous!” Good question. I’ve known some couples who are into some pretty esoteric things, and they’re one-on-one. As my bud Raoul once told me, he and Daniel are now so fine-tuned to each other that the very idea of bringing someone else into the mix — or even going out and looking for someone into it — is absurd. “No one really gets me on that level,” he said.

And I think that’s how it is for my guys: they’re not inclined — well, not till now — to nose around for anything outside the relationship because what they have, right now, has been honed and perfected over the years so much that it’s unlikely anyone else would get them on that level. I suppose, in a strange way, that’s what we should all aspire to in our relationships: that one — or two or more, if you wish — who really knows you. Maybe not all the way down deep, but pretty gosh darn close. Not that that means this other person can solve all your problems and be that perfect other half we read about in too many romance novels… but someone who just gets you, to that level. Whether what you have is open or closed doesnt matter. They just have to get you. And you them.

So now that the door has been creaked open, what happens next? Not much, I dont think, but then, these guys all have a way of surprising me. As I said a couple of days ago, this wasnt I’d originally intended for Red and Curly and the storyline — for those curious, they were going to be the strippers Elliot called Gordie about. In a way, I suppose, they wound up being just that.

OK, we’ll be focusing more on the main storyline and putting this part of the blog back onto the casual commentary. Maybe. We’ll see. And yes, of course there’s a coda to this story. Look for it tomorrow.