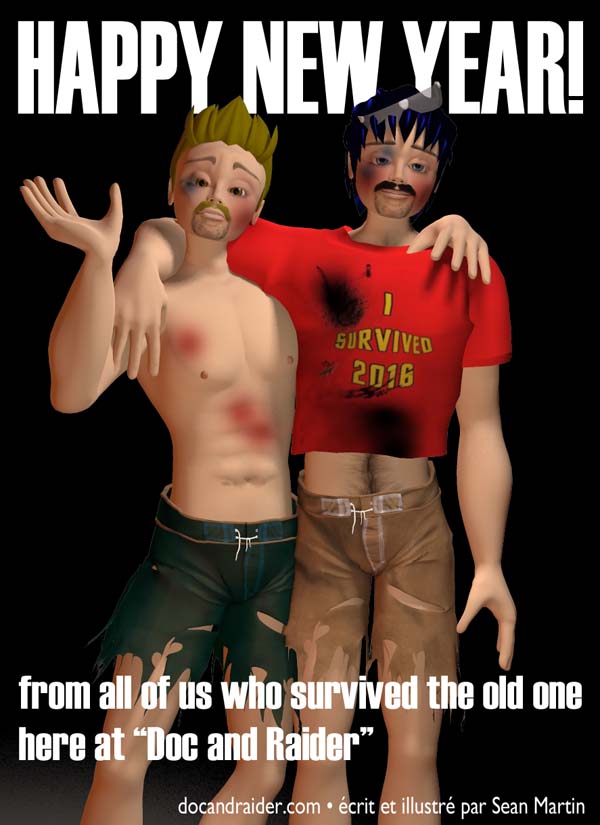 What a wild ride it’s been for the boys and their friends this past year… Doc and Ray’s front closet was taken over by gun activists, Eddie started work on refurbishing his family estate’s chapel, Grady finally got it on with his long-suffering boyfriend, everyone went to see the new Star Wars film, which bore a remarkable resemblance to Gone with the Wind, Kai’s old girlfriend showed up and — as a result — Al was temporarily blinded by her brother’s acid attack, Doc and Ray walked the runway naked as a “celebration of the masculine form”, Mik had to deal with his getting older over an ice cream cone and a musical number, everyone had to deal with something from their past — literally, little Raymond had his first kiss, Elliot finally finished FERRO2, and Eddie had to cook dinner for his future mother in law to win André’s hand… not to mention a whole lot of other stuff!

So for 2017? We’re gonna introduce a couple of new characters and haul back some old ones for a little more face time. The strip is starting in a new direction — not because i wanted it to, but because it just is — and I’ll be curious to see where it goes. A few definite things to look forward to: Eddie and André will tie the knot, Elliot will produce another film, and… well, we’ll see. The big thing, tho? We’ll be hitting 4,000 episodes, probably around March. Yikes!