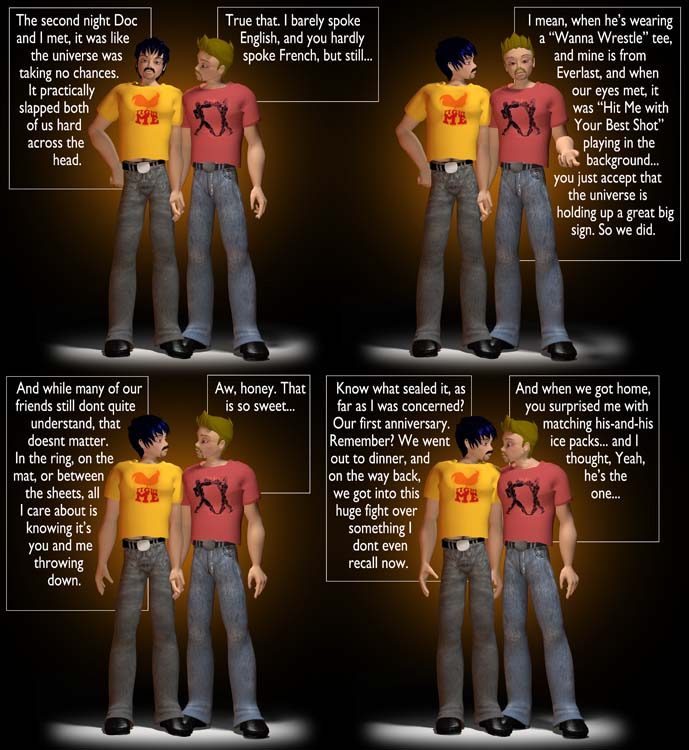 During my recent trip to NY for the Queers and Cartooning conference, I was part of a panel on “Romance in LGBTQ Comics”. While I was prepping for the presentation, I came to the rather startling realization that every grouping in this strip approached their relationship in a strange and odd way. It wasnt planned like that in the beginning, but looking over them all now, it’s almost shocking anyone in this strip got hitched, given how they started out. After all, consider: Eddie and André, a rich man and his hooker-escort boyfriend… except the hooker-escort isnt a hooker-escort, but pretends to be so his lower-class presence wont be viewed as a threat to his lover’s business dealings. Or Elliot and Gilles: an American porn producer falling for a Canadian Catholic priest. Frank and Dave: one gay, one straight, both determined that physical biology isnt going to be an issue. Then, Doc and Ray themselves — to the world, a romance that verges on heteronormality, and yet one whose level of kink outstrips almost everyone in sight (not for nothing that their wedding colours were black and blue). And let’s not even think about Aiko and Louis, whose relationship started because, at one point in time, one of them was dead. Seriously, he was.

Thing is, all of these relationships started from almost impossible odds, and yet over the years, they’ve made it work. Again, this really wasnt by some grand design: it’s just how it all sorted out. Still, it does please me to no end that I have this webcomic that, in its quiet way, is almost a celebration of the anarchic possibilities of LGBTQ relationships.

And isnt that what Pride is supposed to be about? Fifty years ago tonight, at a little past midnight, the streets in Greenwich Village were chaos, with queers from all over the five boroughs coming together to tell everyone that our relationships and our happiness is, as Connor pointed out at the beginning of this arc, none of their business. We define how we come together, whether heteronormative or polyamoric or however we want to do it, because it is our right to do so…

… which is why it saddens and frustrates me that we seem headed back to a time when we are told what we “should” do. Worse, we are told this not only by larger society, but by supposed “leaders of the community” who’ve taken it on themselves to determine what is and is not acceptable in how we are to be conduct ourselves. Sure, like larger society, they have great intentions in dictating these things — it’s all for our own good, after all — but we all know where good intentions can lead. The people who raged at the machine outside that tacky little bar in 1969 couldnt give a flying feck what anyone thought of how they conducted themselves.

And neither should we.